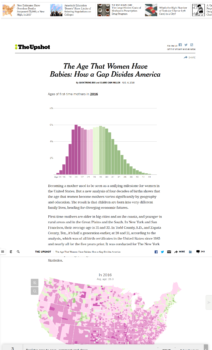 There is a growing inequality gap in America illustrated in part by the differences in the age that women have babies. The New York Times described Mountain Home Montana as a solution for bridging that gap for young mothers and children! Read the full article here. Read the Mountain Home specifics below.

Sadie Marie Groff, who lives in Missoula, Mont., was 20 when she had her first son, Dahvon. It wasn’t planned, and she wasn’t married. She had two more boys, Allen and Zayden, with a different man, who is now her husband.

She hadn’t thought much about college before becoming pregnant, she said, but her goal now is to get a degree in radiologic technology, once she has time to take courses. Now 28, she takes care of her children during the day and works three-hour shifts as a health aide at night.

Being a young mother has benefits, she said: “I still have a lot of energy to deal with them, and when they get older, I won’t be too old.”

But it has been financially difficult. When she was pregnant with her second baby, she temporarily moved into a home run by Mountain Home Montana, a nonprofit aimed at helping young mothers. It also provides child care and employment counseling, and she receives government assistance for housing and health care.

Research has shown that where children start in life strongly influences where they end up. Providing resources for young mothers and children — like the program that helped Ms. Groff, and policies like affordable child care and college — can help smooth the differences. “The strategy,” Ms. Rackin, the L.S.U. sociologist, said, “is to provide the best opportunities for children.”